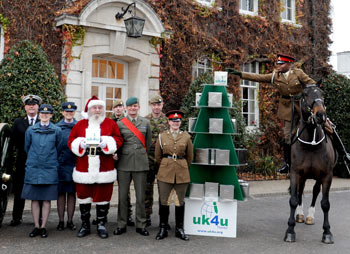 A seven foot Christmas tree was decorated with the boxes – affectionately known as “square stockings” – by our Armed Forces – outside the Officer’s Mess, with Trooper Kuziva Dapira riding Caprice the horse, placing a final box on top of the tree. Surrounding the tree wishing our Servicemen and women a Happy Christmas were Father Christmas (our very own trustee Allan Sims!), and members of the Armed Forces who have received a Christmas Box while serving on operations on Christmas Day.

Attending the launch was Sergeant Ian Breeze Royal Marines, who has been in Afghanistan over Christmas in previous years, and has received one of the boxes we sent. He was very enthusiastic about the box and the charity, and said “I found the items very useful and a real morale boost. Things like torches always come in handy, as do the little collapsible cups – you never know when someone’s going to offer you a hot drink!”. Comments like this really make the effort worthwhile, and we’re so please we helped give him a more cheerful Christmas.

The King’s Troop Royal Horse Artillery were welcoming hosts for Operation Christmas Box Although officially Her Majesty The Queen’s ceremonial Saluting Battery, two of their soldiers are currently deployed in Afghanistan, and will be spending their Christmas there. Indeed, the most recent soldier to return from operations is Trooper Kuziva Dapira, and a serving female soldier whose husband is currently deployed to Afghanistan, Trooper Emma Stevens, also attended the event.